The power of the boycott, or a campaign by users (or non-users) is not a new phenomenon.

But social media means that when an issue gains sympathy, particularly amongst an influential group who are well connected and can make a very simple argument work in 140 characters or less, businesses need to sit up, take note, and dust down the crisis communications plans.

The campaign against the Beverly Hills Hotel is a case in point.

LGBT pressure groups have for a long time highlighted the Sultan of Brunei’s (the hotel’s ultimate owner) harsh penal code. In Brunei, gay sex could be punishable by death – as could adultery).

But it was one tweet by Ellen de Generes, which kick-started a celebrity-led, media-followed campaign to highlight the issues

Since picked up by a whole range of celebrities – and businesses – keen to be seen to boycott the hotel, or indeed the whole Dorchester Group’s range of hotels 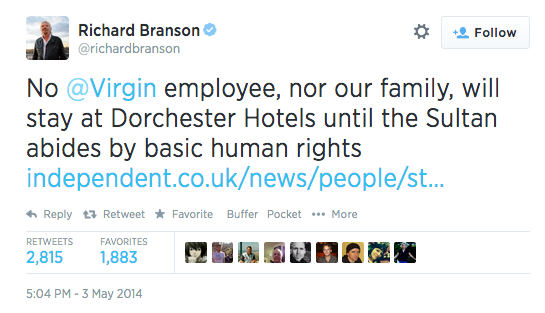 This attention is bound to be having financial repercussions on the hotel chain as well as causing reputational damage. So much so, that the CEO (eventually) responded, with a line echoing the Beverly Hills Hotel’s response, which I paraphrase: Please think about the detrimental effect this has on our employees and the local community. We would never discriminate. Please try to put our owner’s politics out of your mind.

It just won’t wash. Owners’ politics and pronouncements are an intrinsic way that companies do business these days.

No rebuttal site – not even The Beverly Hills Facts.com – will work here. The LGBT community, and those sympathetic to the points they raise, will carry this boycott on for a long time to come, with significant financial and reputational implications.

“All that happens must be known.” The Circle is Google in disguise

Scroll back to top